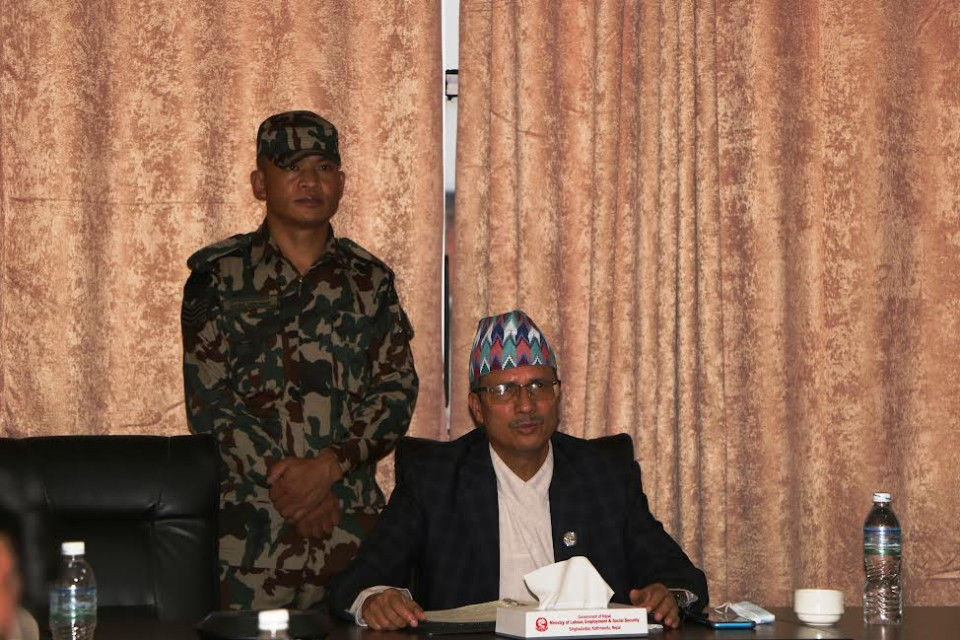 Kathmandu: Minister for Labour, Employment and Social Security Sher Bahadur Kunwar has directed the labour attaches and councillors not to approve the demand given by any country.

Speaking at a virtual meeting with labour attaches and counsellors of nine countries at the ministry on Thursday, he urged them not to give approval as the demand has come.

Minister Kunwar said that they should be given approval only if it is in the interest of the country and the workers by understanding them well after bringing the demand. He also urged them not to accept the demand on the basis of anyone's pressure and threats.

Minister Kunwar has also said that he will talk to businessmen who are afraid and threatening. He directed the labour attaches and councillors to work as per their role as the government has sent them to represent the country.

Minister Kunwar said that counsellor labour attaches should play a role in protecting the rights of the workers, rescuing them in case of problems and resolving disputes between employers and workers. He also urged the nepali workers to monitor the work done and the salary they get from time to time.

Labour attaches and counsellors from nine countries briefed Minister Kunwar about the problems of the workers in the labor destination countries where he is working, the status of the salary, the fraud committed by the manpower entrepreneurs, the management of jail and dead people, the support being provided by the embassy to the stranded people, among others.

He informed the minister that Nepalis are facing problems due to hiding on visit visas rather than working. They urged Minister Kunwar to help manage the visit visa. They also demanded that the government should take special initiative to send only skilled workers abroad.