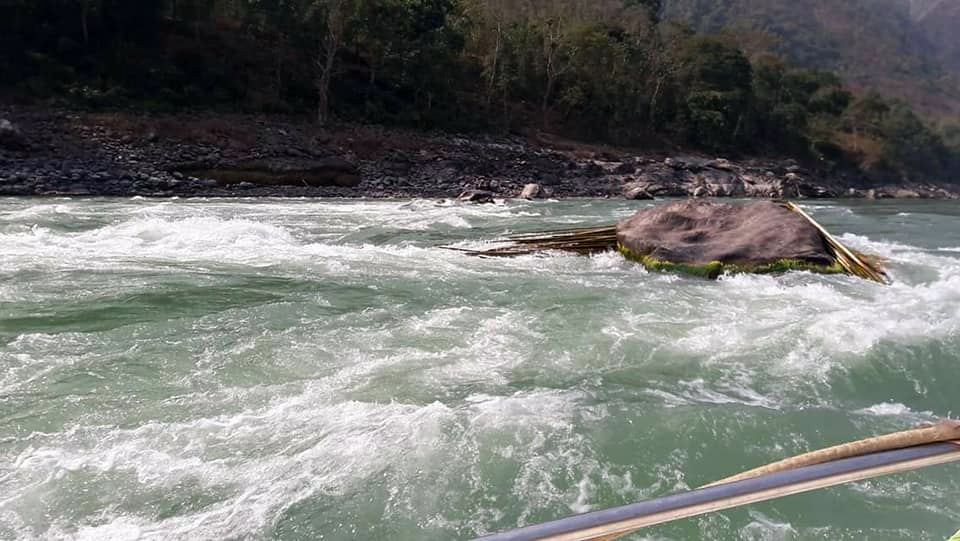 ITAHARI: In the last couple of months, Nepali press and cultural discourse is inundated with Khuwalung issue. Conservationists, Kirati cultural activists, politicians and even public are talking about 'Khuwalung'. To glance at this burning issue, RSS has outlined the issue in its nutshell.

What exactly is Khuwalung?
For commoners, Khuwalung is merely a big boulder standing above the mainstream flows of Nepal's biggest river Saptakoshi braving the forceful currents of the mighty transnational river. It seems like floating in the river. It is located just beneath the confluence of the Tamor, Arun and Sunkoshi rivers, which jointly form

Poet Dewan Kirati said Khuwalung is one of the greatest iconic Kirati natural landmarks. ''In the vast and ancient Kirati community, we have many places, rivers and hills which are so important based on Kirati folklores, myths and oral traditions,'' said Kirati. He added, ''Khuwalung contains an incredible mark in this tradition.''

According to Bijaya Rai, a local journalist and also a member of Kirati community, Khuwalung has many synonyms in the vast Kirati community which has dozens of indigenous languages. ''Khuwalung is also referred to as Khokwalung, Walung, Sayalung, Manglung, among others,'' said Rai, ''In Kirati language 'Khuwa' means water and 'Lung' means stone.''

How did Khuwalung come into national limelight?
Previously limited within Kirati cultural activities, Khuwalung got mainstream after a social media campaign to conserve Khuwalung got spotlight. At first, social media users launched this campaign linking this issue with a section of the speech delivered by Prime Minister KP Sharma Oli.

Prime Minister Oli, while addressing the mass gathering at Provincial capital, Biratnagar, spoke on his priority to upgrade waterways along Saptakoshi. Saptakoshi river is the only river in Province no 1 having commercial water navigation facility. Many watercrafts ferry people from southern Bhojpur to Chatara of Sunsari. This water navigation is used both for public transportation and recreational jet-boating.

On 20 February, PM Oli said, ''Ships (jet boats) ferry people from Bhojpur to Chatara within 11 minutes. We will dismantle the one trouble-making boulder with the help of crane and clear the waterways.'' Oli did not pronounce 'Khuwalung'. However, many Kirati cultural activists said the so-called trouble-making boulder is none other than Khuwalung. Then ensued the public campaign to save Khuwalung both in online and offline circles.

Madan Puraskar-winning literary figure Rajan Mukarung and other cultural activists started taking leads on the campaign. Many scholars and cultural experts gave interviews, wrote articles and voiced their concerns about the significance and conservation of Khuwalung.

Within few days, Khuwalung evolved itself from its limited cultural domain to mainstream discourse. Jet-boat operators and people supporting them backed the idea of dismantling of the boulders. Others vociferously opposed the idea. The umbrella ethnic grouping of the Kirati community, Kirat Rai Yayokkha, and some political parties also voiced their views on the protection of Khuwalung. Activists painted slogans like 'Khuwalung is our home', 'Khuwalung is our soul', 'Save Khuwalung', among others, both in social media posts and at the surrounding area of Khuwalung.

How has been the state response on the issue?
Outspoken PM Oli is tight-lipped on Khuwalung issue. Neither he said he was not talking about Khuwalung to dismantle nor he said the boulder he was talking about was other than the sacred Khuwalung.

However, on part of Province 1 Government, Chief Minister Sherdhan Rai recently visited the venue. He was at the venue on March 30 together with senior bureaucrats and technicians of the provincial government.

Addressing the locals, stakeholders and Kirat Rai Yayokhkha representatives, CM Rai assured on the protection of the sacred stone. He said, ''There is no official plan, policy, decision and any attempt to destroy Khuwalung from local, provincial and federal governments. I feel sad to see people who are making illusions among public. We know this and these sorts of religious and cultural heritage are our treasures. It is our duty to protect, conserve and promote these heritages. I request all concerned not to do politics in the name of these heritages.''

Before CM Rai, Prem Kumar Rai, the chair of Hatuwagadhi Rural Municipality, which is also a part of Khuwalung had talked middle path to save Khuwalung and proceed ahead with works on waterways development.

''Nepal Government has not officially talked about dismantling of Khuwalung. Nor PM Oli directly named Khuwalung. This issue must be settled in win-win situation.

We need Khuwalung and waterways both. For this, we need middle path so that waterways will be upgraded and Khuwalung will be protected,'' he opined.-RSS